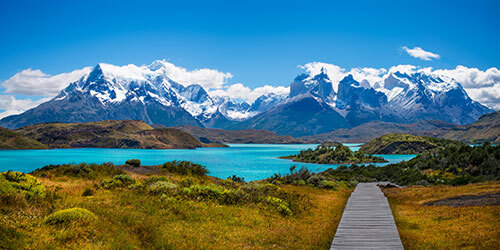 Arrive in Buenos Aires today, Argentina’s cosmopolitan capital. Settle in to your veranda stateroom and take time to explore your ship. As we dock here overnight, you will have plenty of time to explore. Be captivated by the bohemian flair of La Boca, marvel at the grand homes of Recoleta, one of the finest quarters of the city, and discover the many facets of Buenos Aires. Walk in the footsteps of Eva Péron. You will see the ornate Casa Rosada, the presidential palace that was once her home, and visit her final resting place at La Recoleta Cemetery as you discover the story of the much-loved first lady and inspiration for the Broadway musical Evita.

Enjoy more of Buenos Aires as you walk Avenida Corrientes, the bustling thoroughfare of theaters, shops and cafés known as the street that never sleeps. Buenos Aires is a dazzling feast for the senses. Narrow streets in the city’s colorful neighborhoods reverberate with the intoxicating melodies of the tango. Meanwhile, restaurants are busy perfecting the art of grilling meats for patrons, and the city’s parks and plazas invite passersby to linger and watch the world of Buenos Aires go by.

Uruguay’s capital city boasts perhaps the highest quality of living of any city in South America. Rich in parks, sweeping vistas and architectural styles, Montevideo is blessed with a subtropical climate, guaranteeing warm summers and mild winters. A panoramic tour features highlights such as the Legislative Palace, a grand neoclassical building, the Ciudad Vieja, or Old Town, and the Batlle y Ordóñez Park with the iconic La Caretta Monument. Or enjoy an overland tour to marvel at nature at the magnificent Iguazú Falls.

Stay in shape at sea with a visit to our Sports Deck, or take a gentle stroll around our 360˚ Promenade Deck. As you cruise, take in the sea views from the Explorers’ Lounge or reserve a soothing massage at The Spa. Linger over tea and scones in the Wintergarden or soak up the sun on deck.

Depart your ship and head to the Valdéz Peninsula, which is connected to the continent by a narrow strip of land. Enjoy its natural beauty and biodiversity, before visiting Puerto Pirámides to observe a sea lion colony from the cliff tops. Or immerse yourself in the history of the area’s Welsh settlers with a trip to the town of Dolavon and the city of Gaiman, where the Welsh language is still spoken.

As you cruise today, perhaps you will relax and enjoy the amenities of your stateroom, with its private veranda and beautifully designed, streamlined Scandinavian interior. Indulge in a morning cup of coffee on your veranda, with the majestic sea as a backdrop, or unwind on the couch with your favorite book.

More than 300 miles off the coast of South America lies the rugged archipelago of the Falkland Islands. Here, you will find several hundred sparsely inhabited islands with unspoiled nature and diverse fauna. Some 60 distinct bird species breed on the islands, including five different species of penguin and some of the world’s largest colonies of albatross. Visit the world’s most southerly Anglican church and the Whalebone Arch, explore the historic streets of Port Stanley, and meet the renowned landlady at Kay McCullum’s Bed & Breakfast.

Perhaps you will get a morning workout at the Fitness Center and soothe your body with a hot sauna and a few minutes amid the refreshingly chilled air of the Snow Grotto. This evening, enjoy cocktails in the Explorers’ Lounge and an authentic Italian meal at Manfredi’s Italian Restaurant.

Enjoy two scenic days as you cruise around Cape Horn, once the pinnacle of a seafarer’s career, and through the Beagle Channel. The Cape marks the northern boundary of the Drake Passage, where the Atlantic and the Pacific Oceans meet. Retrace the epic voyage of Charles Darwin through the Beagle Channel, the narrow strait separating the main island of Tierra del Fuego from a string of smaller islands to the south. The area has not lost any of its stark natural beauty since Darwin described it in lyrical terms in 1833.

At the very tip of South America, Ushuaia prides itself on being the southernmost city in the world. The city’s spectacular natural surroundings with subantarctic forests, lovely lakes, pristine glaciers and rich peat bogs are its main asset, but Ushuaia’s history as a penal colony of sorts at the “End of the World” makes the city itself an interesting place. Visit the former prison, which today houses a museum, or soak up the scenery on a drive through Tierra del Fuego National Park.

Chile’s southernmost city sits on the north shore of the Strait of Magellan, named after the Portuguese explorer who pioneered the sea route around South America in 1520. Its heritage as an explorer’s haven still remains to this day, with many expeditions to Antarctica beginning from here. The beautiful yet rugged landscape of this sparsely populated region was once thought to be inhabited by Patagonian giants. Experience its mystique on a helicopter flight over the spectacular peaks of the Torres del Paine National Park, or explore the city’s charm on a scenic drive as you take in the highlights.

During our scenic cruising time, keep watch for sea lions and dolphins as you cruise among the rugged mountains and blue-tinged glaciers of Chile’s distinguished fjords. The Amalia Glacier, located on the edge of the Sarmiento Channel in Bernardo O’Higgins National Park, originates in the Southern Patagonian Ice Field.

Enjoy a landscape of snowy peaks, massive blue glaciers from which waterfalls tumble into the sea and steep-sided fjords, a land of great pristine beauty accessible only by ship. For centuries, seafarers have used the maze of channels to travel up and down the Chilean coast in the sheltered waters of the Chilean fjords.

Today, you will call on the city of Puerto Montt, situated on the north side of a sheltered bay and less than 20 miles from the summit of the Osorno volcano. A main city in Chile’s lakes region, Puerto Montt boasts beautiful scenery. Snowcapped volcanoes, lush green fields and forested national parks dominate the landscape. Enjoy a panoramic drive through the scenic villages and towns, and visit the German Colonial Museum to explore the life and times of the early German settlers.

Spend another relaxing day cruising the waters of the Pacific Ocean. As you sail, you might take a swim in the Infinity Pool. Join new friends for afternoon tea in the Wintergarden or relax on board as you sip a cocktail by the pool.

Blessed with a magnificent setting in a steep natural amphitheater turned toward the Pacific, Valparaíso charms visitors with its colorful labyrinthine streets that rise up from the water’s edge and through the hills. Funiculars carry pedestrians up and down the slopes, where they ascend to marvel at the views over the port, and where artists, authors and poets have come for generations seeking inspiration. Perhaps take a tour of Santiago, Chile’s capital city, brimming with museums, theaters, world-class eateries and numerous shopping centers. Explore the bohemian district of Barrio Bellavista and meander through the streets lined with vibrant murals at the foot of San Cristóbal Hill. Or, weave your way through the tiered maze of Santa Lucía Hill for magnificent views over the city.

Disembark your ship this morning as your journey comes to a close. Alternatively, you may choose to extend your time in Chile with a post-cruise extension in Santiago.

Best of the West

Skyscrapers, sequoias, and impossibly big skies await you in Americ...

For travellers looking to explore a more remote corner of North Ame...

Highlights of the Deep South